Wasmer server-side WebAssembly runtime comes in multiple flavors. Written in Rust, it is embedded in different languages, such as C, Python, Go, Ruby, PHP, Java, and many more (discover all the integrations).

As many of our embeddings, the C embedding is implemented in Rust itself. Rust is perfectly capable of exposing a C compatible ABI (learn more by reading The Rustnomicon Book, the Foreign Function Interface Chapter). Moreover, Rust comes with a first-class tooling for testing and documenting projects. We wanted to leverage those tools to:

Why? Because they are simple, they work everywhere, and every Rust programmer knows them. They are part of the foundation of the Rust ecosystem.

If you are a Rust developer, you are familiar with the #[test] attribute that annotates a function that acts as a test:

To run that test, one simply runs cargo test --lib.

If you have ever written tests in C you know the struggle. Either with CMake, or Makefile, you name it.

But what if we could write Rust code to test our C API? Something like:

Well, first, thanks for asking dear reader! And second, what an excellent idea! Good news: With a little modification, that's possible. We have written the inline-c Rust crate to fulfill this precise purpose. Add inline-c = "0.1" to your [dev-dependencies] in your Cargo.toml file, and let's see it in action:

Close enough! You will notice that we have assertions in C (from assert.h). Running cargo test --lib will:

It's a little bit more verbose because we have to write int main() { … } etc. That's on purpose, because we might want to add some #include, or more C code around it. It is also possible to assert on the results of the C program. Let's see another example of how to add assertions on stdout for example:

In this case, we include stdio.h to get printf. We also see that assertions are on the Rust side, not in the C side.

So, this solution is pretty flexible. Compiling C on multiple platforms can be very challenging sometimes. inline-c is using the excellent cc Rust crate behind the scene to support as much platforms as possible, with a little bit of black-magic.

So far, we were testing C code not implemented in Rust. Let's dive into a tiny real-life example.

Let's add the following lines to the Cargo.toml file:

Let's edit the src/lib.rs file to:

We keep the code as simple and short as possible for the sake of readability. We all know that we must check for NULL pointers etc. C is a dangerous place.

Great, the hello function is present in our shared object.

OK, let's try to get this working!

To achieve this, let's edit the build.rs file:

There is more work in the build.rs file to make it compatible with Linux, Windows and other platforms. We kept it short and simple for the sake of readability (it's a matter of changing libhello.dylib to libhello.so on Linux, and to hello.dll on Windows).

If you want to avoid configuring inline-c and cbindgen, you may want to take a look at the cargo-c project. It does a lot of things automatically for you, in addition to support inline-c:

It produces and installs a correct pkg-config file, a static library and a dynamic library, and a C header to be used by any C (and C-compatible) software.

It's really a useful project.

Documenting: C examples that are tested

Let's push the concept further. So far, we are able to write C code inside Rust. OK, and let's not forget that Rust has great comments where blocks of code can be run as tests, like:

Did you notice the # in front of some lines? It's a rustdoc's trick that makes it is possible to hide portions of the code if they are prefixed by # + a space.

We can run it with cargo test --doc. And we can generate the documentation with cargo doc. That's really super classic for a Rust developer.

But what if we… write… and test… C code… with cargo test and cargo doc? I really love your way of thinking dear reader! Let's try that!

OK. Let's test it. Are you anxious?

Of course it works. Never had a doubt about it. And let's try to generate the documentation:

Here is the result: 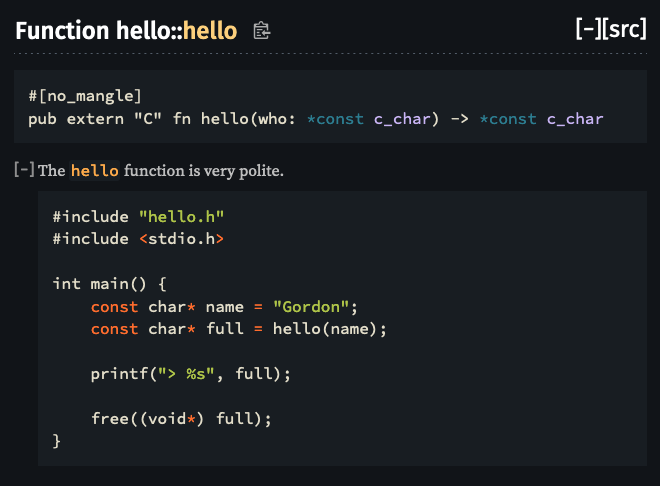 Fantastic! Our example in the Rust documentation is a C program, that is actually tested. We are sure the documentation provides correct examples to our awesome users.

And that, dear reader, is how I met your… how the wasmer_c_api crate is tested and documented. No need to say we have other kind of tests, but our unit tests and documentation tests are powered by inline-c. The documentation is published online at docs.rs/wasmer-c-api. Check for example the instance “Rust module” which contains all the functions related to the wasm_instance_t type.

Not only this technique is powerful because it relies on the great Rust tooling and all its features (like intra-links in the documentation, testing etc.), but it's “free” because we don't need extra tools.

The astute reader you're have noticed that the syntax color highlighting is incorrect. It's the scheme for Rust, instead of being the scheme for C. There is an issue opened for that in the rust-lang/rust repository (#78917). It will be useful to other tricks like this.

At the time of writing, we have 23 unit tests, and 61 documentation tests, powered by inline-c, in addition to more test suites. We had a lot of fun developing this, and we believe it's pretty useful. It allows to iterate very quickly over the implementation and the tests, while keeping the same tooling. It provides consistency and comfort, which is always welcomed when dealing with a C API, in addition to provide better examples and better documentation to the users.